In 1995, Michael, aged 25, not long after completing his printing apprenticeship, decided to leave his job at the local newspaper, and fulfil his dream of starting his own business.

He began selling printing products door to door when one day,one of his clients asked him if he could source some fridge magnets for his business.

So he contacted a local fridge magnet company in South Melbourne to get a price.

He knew from his printing background that the unit rate should be considerably cheaper.

Frustrated, he thought, "hell, I'll try to manufacture them myself!"

He figured if he could make just 50 sales, he could offer the customers a great price for their magnets by sharing the costs through the production process and at the same time make money himself. It would be a win win.

So he started taking orders door to door from small businesses throughout the Melbourne metropolitan area. 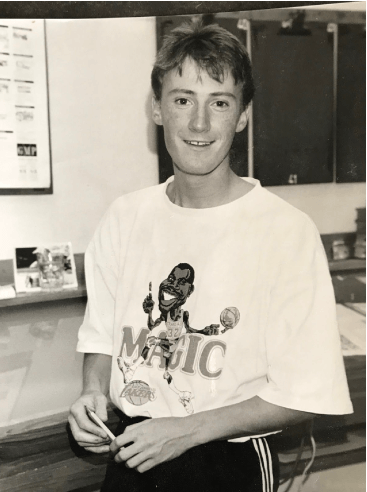 He figured if he could make just 50 sales, he could offer the customers a great price for their magnets by sharing the costs through the production process and at the same time make money himself. It would be a win win.

So he started taking orders door to door from small businesses throughout the Melbourne metropolitan area.

By the time the very first batch of 50 customers were ready for press, there was still no certainty the concept was going to work.

He was as green as grass, and had never tried it before.

The first part of the process was arranging to have the printed sheets manufactured by the local printer.

Then the mounting of the printed sheets onto the magnetic material was initially done on the fridge door in the kitchen at home. So far, so good.

Once the sheets were mounted onto the magnetic material, he loaded them into the back of his car and drove to the local printer to have them trimmed to size.

But the million dollar question was 'could the guillotine accurately cut through the magnetic sheets?''

This was a pivotal moment for the new business. If the sheets weren't able to be guillotined, not only had he wasted 3 months of hard work, no income yet, and $5000 borrowed from mum & dad, but the startup business would have come to a screaming halt.

Thankfully, the guillotine blade cut through the magnetic sheets like butter!

The new business was born.

After that, the orders were boxed and delivered one by one to each of the businesses.

Blue and red print were the only colours offered in the first year.

Although the first 12 months was tough, (like most startups), the business gained some traction, with referrals and reorders trickling through.

By this time, Michael's father, Kevin, joined the business. They rented a small factory in Tullamarine and bought their first guillotine

They experienced rapid growth in the following couple of years through direct mail campaigns. His mum would help personalise letters to send to businesses to encourage them to use fridge magnets instead of business cards.

Not long after, Michael's twin brother Matthew, who had sales and marketing experience, joined them. It would be renamed 'Mister Magnets'

Matthew initiated a telemarketing team where the business experienced it's second stage of rapid growth. By then, they started offering different sizes, a high gloss laminated protective coating and were the first company to offer full colour printed magnets.

Along with their mum and dad, the twins had their younger brother and sister also involved in the business. 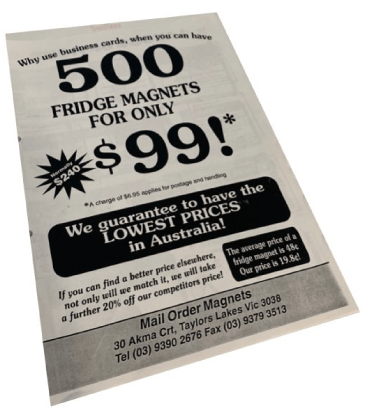 It's still a very family oriented business today, with both mum and dad retired, and Matthew and Michael continuing to work in the business.

50,000+ customers later, and a team of loyal, dedicated long serving staff helping to get the business where it is today, it's still going strong. Countless customers praising the benefits of fridge magnets has made it very satisfying for the Mister Magnets team, knowing they're helping small businesses throughout Australia grow.

Their secret is always trying to stay a step or two in front of their competitors and treating their customers like gold, as they believe the customers are the ones who pay everybody's wages. 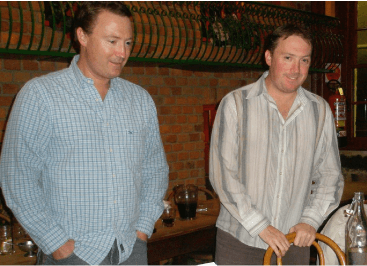